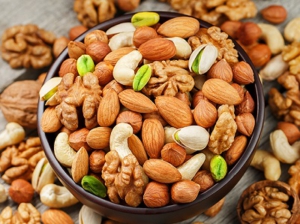 Long-term, high nut consumption could be the key to better cognitive health in older people, according to a new stud.

Dementia is a syndrome associated with an ongoing decline of cognitive functioning, according to the NHS. Alzheimer’s Society estimates there are around 850,000 people in the UK living with symptoms of dementia.

However, researchers from the University of South Australia have found that eating nuts may help boost brain function in old age.